Considered one of the greatest Spanish-language poets of the 20th century, Neruda was a prolific writer, his output ranging from erotically charged love poems, surrealist poems, historical epics, and overtly political poems, to poems on common things, like nature and the sea. Colombian novelist Gabriel Garcia Marquez has called him "the greatest poet of the 20th century in any language".

In 1927, Neruda began his long career as a diplomat in the Latin American tradition of honoring poets with diplomatic assignments. He has been honorary consul in Burma, Chilean consul in Buenos Aires, Argentina, then in Madrid and in Mexico. Upon returning to Chile in 1943, he was elected to the Senate and joined the Communist Party. When the Chilean government moved to the right, they declared communism illegal and expelled Neruda from the Senate. He went into hiding. During those years he wrote and published Canto General (1950).

In 1952 the government withdrew the order to arrest leftist writers and political figures, and Neruda returned to Chile. For the next twenty-one years, he continued a career that integrated private and public concerns and became known as the people's poet. During this time, Neruda received numerous prestigious awards, including the International Peace Prize in 1950, the Lenin Peace Prize and the Stalin Peace Prize in 1953, and the Nobel Prize for Literature in 1971. 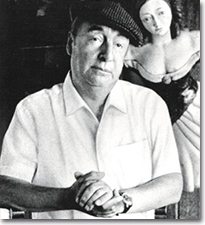