Born in 1925, Tankred Dorst is a famous German playwright. He founded in the 1950’s the puppet theatre Das kleine Spiel, and wrote his first plays. Tankred Dorst proved his talent as a playwright in 1960 with Die Kurve, showed in Lübeck, Mannheim and Heidekberg. Since then his plays have know a huge success worldwide and Tankred Dorst has received many awards for his work like the E.T.A Hoffmann in 1996 and the European Prize of Literature in 2008. 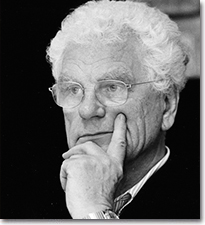