Kim, Jeong Ok, born in Korea in 1932, has made many distinguished contributions to the development of theatre and cinema in Korea as a leading stage director and university professor. From 1985 to 1987 he was Dean of the university's College of Arts, and since 1996 has held the position of Dean of the Chung-ang University's Graduate School of Arts. Outside the university campus he is best known as a prominent stage director and leader of one of the nation's most active theatre companies.
Jeong Ok Kim played a major role in the foundation of the Minjung (Masses) Theatre Group in Seoul in 1963 and later in the creation of the Jayu (Freedom) Theatre Group in 1966. He has since directed over 50 dramas (including Aristophane's Lysistrata, Hamlet, Blood Wedding, and J. Anouiilh's Bal des Voleurs), mostly staged by JAYU but also occasionally by the Korean National Drama Company. The majority of his works are verse plays of intense symbolism, closer to the theatre of the absurd that to the conventional dramaturgy of realism and naturalism. Since the 1970's he has largely devoted himself to the creation of "new drama" to represent the stage art of contemporary Korea. A playwright as well, Kim has directed several of his own works: What will become of us after death?, Birds fly away at Dusk, Flowers bloom even on a Windy Day. He made his debut as a film director in 1987 with Flowers bloom even on a Windy Day, based on his own script. He has also written a number of books on the theory of cinema.
Since the end of the 1970s, Kim has been deeply involved in international theatre exchanges. In 1979 JAYU Theatre Group invited Japan's Tsubaru Theatre Group for performances in Seoul. JAYU performed in Tokyo and in Osaka the following month. These were historical events opening up cultural exchanges between the two countries that for political reasons had had little contact since the end of the World War II.
Under KIM's leadership, Jayu Theatre Company has made a number of performing tours in Japan and visits to France, Spain, Tunisia and Czechoslovakia. Jeong Ok Kim has been a member of the Korean Academy of the Arts since 1991. From 1979 to 1982 he was president of the Korean National Theatre Association. He was also president of the Korean ITI Centre between 1983 and 1994. He has been elected a member of the ITI Worldwide Executive Committee five times since 1981, and was elected to its vice-presidency in 1989. In 1995 he became President of ITI Worldwide.
In 1997, Kim was awarded the important Il Min Prize and in 1998 was the winner of the prestigious Nikkei Asia Prize for his outstanding contribution to culture and cultural exchange. In January 2000, he was appointed President of the Korean Culture and Arts Foundation by the President of Korea. 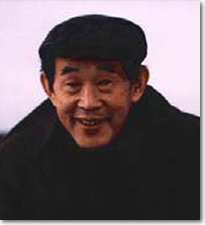