The Théâtre du Soleil is celebrating its fortieth birthday. In 1964, Ariane Mnouchkine, with her fellow-students from university theatre, established a co-operative known as the Théâtre du Soleil (Theatre of the Sun), a name which represented what theatre meant for them. They began their professional activity by performing Arthur Adamov’s adaptation of Gorki’s “Petits Bourgeois” at the Mouffetard Theatre.
Their second production, “Le Capitaine Fracasse”, adapted from Théophile Gautier’s book by one of the troupe’s members, Philippe Léotard, reflected their unique approach within French theatre. This was based on the collective organisation of their work, and also drew on improvisation. However, while all those involved offered suggestions, and the production grew out of everyone’s imagination, the personality of the Théâtre du Soleil appeared to be fundamentally linked to that of Ariane Mnouchkine who led and orchestrated its work.
Twin ambitions motivated the Théâtre du Soleil: inventing theatre forms and creating a poetic art specific to the stage which would impose the human, social and political reality of the performance. Thus in “1789” we found village fair stands where jugglers reflected a revolution in action while in Tambours sur la Digue” (The Flood Drummers) by Hélène Cixous, giant puppets were used and in the “Dernier Caravansérail” (The Last Caravan), pathetic little rolling platforms transporting protagonists and props mirrored the plight of immigrants throughout the world. “1789”, which premiered in 1970 at the Piccolo Teatro of Milan, and then in Paris when the Théâtre du Soleil settled at the Cartoucherie of Vincennes, was a response to the troupe’s concern to find content that would strike a chord both with actors and audiences. With the 1789 Revolution, a starting–point of today’s society, they sought to give a critical analysis of History as it was unfolding. This led them, especially Ariane Mnouchkine, to become seriously involved in struggles for freedom and against injustice, as artists, without falling into a didactic discourse.
While “1789”, followed by “1793”, and “L’Age d’Or” (The Golden Age) and other productions illustrated collective creativity on a theme, Ariane Mnouchkine also directed, for the pure pleasure of making theatre, innovative productions of Shakespeare’s “Richard II”, “Twelth Night” and “Henry IV” by inventing an unusual visual and sign language remarkably adapted to Shakespearean drama. She repeated this process with Greek tragedy, “Agamemnon” and “The Eumenides” by Eschylus, and “Iphigenia at Aulis” by Euripides. She also restored the original satirical power of Molière’s “Tartuffe” by locating the plot within a contemporary fundamentalist Islamic community with its traditions and taboos that oppress women.
She presented two powerful dramatic panoramas created by Hélène Cixous, reflections on contemporary world history: “L’Histoire Terrible mais Inachevée de Norodom Sianouk, Roi du Cambodge” (The terrible but unfinished story of Norodom Sianouk, King of Cambodia) in 1985 and “L’indiade ou l’Inde de leurs Rêves” (The Indiorama or the India of their Dreams), in 1987.
In selecting her productions, Ariane Mnouchkine has always nurtured the freedom to follow her inspiration. Incessantly engaged in the creative process, the Théâtre du Soleil continues to evolve.
Paul-Louis Mignon - Critic, Historian,
President of the Society of Theatre History (France) 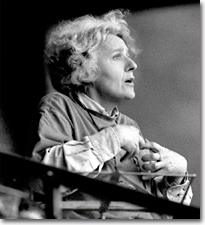