Miguel Angel Asturias (1899-1974) was born in Guatemala.
After he finished his law studies, he founded with fellow students the Popular University of Guatemala, whose aim was to offer courses to those who could not afford to attend the national university.
In 1930, he finished his Leyendas de Guatemala (Legends of Guatemala) in Paris. Published in Madrid, the book was translated into French by Francis de Miomandre, who sent his translation to Paul Valéry. The French poet was greatly impressed, and his letter to Miomandre was used as the preface to the 1931. The same year, Leyendas de Guatemala received the Silla Monsegur Prize, a reward for the best Spanish-American book published in France.
During his stay in Paris from 1923 to 1933, Asturias wrote his novel El Señor Presidente (The President), In 1944, Asturias was appointed cultural attaché to the Guatemalan Embassy in Mexico.
In late 1947, Asturias went to Argentina as cultural attaché to the Guatemalan Embassy and, two years later, obtained a ministerial post. He published Sien de alondra (Temple of the Lark), 1949, an anthology of his poems written between 1918 and 1948, the novel Viento fuerte (Strong Wind), 1950.
In 1966 Asturias was awarded the Lenin Peace Prize. In the same year, he was appointed the Guatemalan ambassador to France by President Julio Mendez Montenegro. 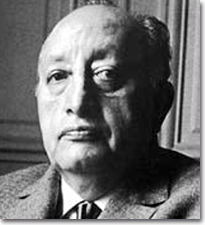